An introduction of sorts. 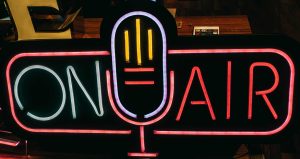 "Geez, I can't believe he said that... I mean I agree, but that's besides the point."

A letter to the listener.

We’re broadcasting to you live’ish on the digital airwaves from the recently renovated studio ‘1a’ found inside the UWM radio headquarters.

Allow us to be your escape, and help you unplug from the world that never lets up. The 24/7 news cycles, the never ending political campaigns, doom and gloom. You won’t find them here. We’re all about the tunes at PRIR. Press play, and unwind. You do you, it’ll be our privilege to entertain you for a while.

We’re glad to have you.
– Staff, PRIR

In the winter of 2022 the UWM group acquired an old AM radio broadcast building, and old but picturesque art deco style building that’d seen better days.

The building was filled to the brim with old equipment, junk, a few prior residence, and in need of some serious renovations. During the renovation effort of the 2.5 story building the main broadcast antenna was severely damaged, onset by what was dubbed “unforeseen circumstances”.

Having spent the majority of the stations budget on cleaning out studio 1a and the atrium, purchasing some “flashy’ studio decor, and sparing no expense on signing some of The City’s top radio talent. There was no funding remaining to repair the antenna array. With spirits at an all time low it seemed the entire UWM radio project would be scrapped before it ever got off the ground.

It was then in a stroke of what management calls “genius”, but others would call “dumb luck” they turned to the digital airwaves to join the realm of radio. With the broadcast problem solved it was determined that ‘Pocket Rock It Radio’ would be given the first go at studio 1a, and the rest as they say was history.

Our staff may be infections, but that's no need to worry.
Get a little closer to your favorite on air host.

The built-in automated in-house constructed supercomputer, the proprietary ‘A DJ Buddy 2000’ takes over where no DJ dares to go ; or has been scheduled. Tune in and join the debate :  is it sentient or just really well programmed?

In The past live, Evan Roberts was a real hotshot in the coproate music distribution world. Unfortunately, those suits and squares live by a set of rules he couldn’t deal with any longer. After a business deal gone wrong, he decided to throw it all away and strike back at the machine.

He’s the resident expert in keeping the lights on and the stiffs out, managing the day to day operations and licensing for Pocket Rock It Radio.

Let Bob ‘The Passenger’ Poppa ride shotgun along with you on a musical journey into the unknown. With a hands off the wheel approach to hosting who knows what musical oddities you’ll pass on your audio road trip. Tune in to hear what’s next.

Forged in the underground areans of machines and engines. The Viper always had a soft spot for those that go hard. He’s spent his years jamming out to garage bands while working in his garage, and now he brings his voice to The City’s premier alternative station.

"My AC Delco cassette deck crapped out on me late last year. Not wanting to listen to the agendas on normal radio I found myself riding around in silence. Then I found Pocket Rock It Radio. You Guys ROCK!!" Immage N. HarryResident, The City
"I tell you what. If I got a nickle for every-time I heard something I'd never head before tuning into PRIR I'd... we'll I'd have a whole lotta nickles by now!"

Juan O'ldmanResident, The City
"I'd become so embittered by the never ending barrage of issues and causes that even my taste in bacon was off. Then I found PRIR. You guys gave me bacon back! Thanks! Keep rocking!"

Bea N. HearinResident, The City
"I thought I heard it all. Then I tuned into PRIR, and stood corrected. Love the different!"

You love PRIR and PRIR loves you back. Never miss a beat. Sign up to be a part of the official Pocket Rock It Radio fan club and be the first to know what there is to know. Sign up today to be eligible for exclusive fan club contests.

From your ears, to your back. PRIR's got you covered.

ChOOSe YOuR OWn adVENTuRE

The Pocket Rock It Radio project is a corroborative labor of love amungst creative types. We're just doing this for fun and will be running this project for as long as we can afford to. Should you feel compelled to contribute to help keep the lights on, and the musical madness on the air. You can make a donation of any size to PRIR using any of the following links.

Down on your luck, but still want to help? That's cool and much appreciated.

The latest from the Music Industry

FoR EvEn MoRE MUSic NEwS

Check the Links In the Menu Below

Ever had something to say and were just looking for a place to say it? Well, you found it! Use the contact form to tell us exactly what that something is. Suggest a band to broadcast. Get your band in the Herd. Don’t like the cut of our jib? Heck even if it’s completely random & pointless, our grouchy customer service representatives can’t wait to hear it. Really… they get compensated per item read, so let’s hear it.